According to the proposal put forward by Senator Nathan Dahm and Senator Marty Quinn, the proposed license plates, would be priced at $35 per year. The revenue generated from the sale of these plates would go to two groups working for war veterans, the Warriors for Freedom Foundation and the Folds of Honor Foundation.

Oklahoma state offers 93 different designs of license plates, which benefit a host of charitable groups and other organizations, including the Boy Scouts of America, the National Rifle Association (NRA) and the National Association for the Advancement of Colored People (NAACP).

The senators’ proposal also specifies that for designing the license plates, the Oklahoma Tax Commission would enter into a licensing agreement with a corporation suggested by President Donald Trump. The senators have not clarified whether the Trump campaign team was kept in the loop about their proposal or not.

Political bickering has already started over the issue, with critics alleging that the specialty license plates were introduced to generate revenue for social causes and not political. Oklahoma Tax Commission spokesperson Paula Ross said that its rules prohibit license plates with messages that are discriminatory, threatening, or political. She clarified that if the state legislature passed the proposal, the Commission would have no option but to work together with the Trump campaign team on creating the specialty license plates.

The Bills containing the proposals will be introduced in the Oklahoma state legislative assembly session in February. 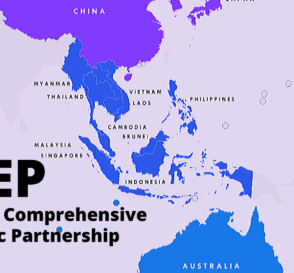 Concerns have been rising that India has made up its mind about withdrawing from negotiations on the Regional Comprehensive Economic Partnership (RCEP). The 16-nation regional free trade agreement involving India, China, Japan, New Zealand, Australia, South Korea, and all ten …
Florence London|December 9, 2019|